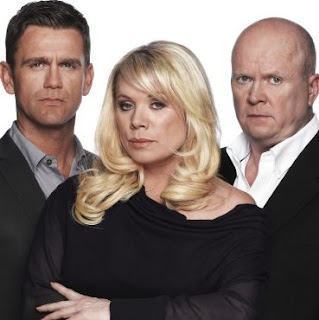 EastEnders' Phil Mitchell and Sharon Rickman are to get back together.

The on/off couple who first slept together in 1994 will rekindle their romance and set up home together with Sharon's son Dennis after recently pretending to be in a relationship to help the Walford hardman gain custody of his granddaughter Lexi.

A source told The Sun newspaper: "Phil and Sharon are two of EastEnders' biggest characters and they've always had feelings for each other. But their getting together again will still come as a shock.

"It promises to be a massive storyline for the rest of the year."

Phil has had growing feelings for Sharon in recent months, but his hopes of romance won't come until she calls off her wedding to Jack Branning at the last minute when she finds he has been talking to his old girlfriend Ronnie Mitchell while she is jail.

A source said recently: "Sharon hoped her wedding day would be one of the happiest days of her life.

"But the love triangle with her, Jack and Phil Mitchell causes rows in the lead up to the wedding and after Jack and Phil clash she discovers Jack has been in contact with his ex Ronnie Mitchell who is in prison.

"That is the final straw and the wedding is called off, which may give Phil hope of a reconciliation."
Email Post
Labels: Jack Phil Mitchell Ronnie Sharon