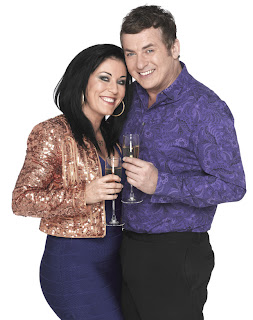 EastEnders' Kat and Alfie Moon won't be able to stay away from each other, Shane Richie has hinted.

The married couple have been estranged since Alfie discovered Kat was having an affair with Derek Branning.

Shane, who picked up the award for best Soap Personality at the Tric Awards this week, said: "Somehow Kat and Alfie, just they can't keep away from each other."

The star said of the dramatic affair scenes: "It was one of the very rare occasions on EastEnders when you got a chance to rehearse.

"We spent two or three days rehearsing before me and Jessie shot our actual half-hour episode we did within that bedsit."

"Normally you just hit the ground running," he said. "You've got to have your emotions at your fingertips, one minute you're crying over someone that's been murdered, the next you're throwing a party in the Vic. That can all be in the space of half an hour. As an actor you've got to step up to the mark."
Email Post
Labels: Alfie Moon Kat Slater

Anonymous said…
I love Kat and alfie. I really want them together. They just fit.
Wednesday, 20 March, 2013

Sophie said…
I think what they need to do is get Kat to get some proper help for what happened... thats why she always goes back to her ways because she never got that help every time she gets better the slightest thing makes her slip again... i think if she got help they would work real well together and then they could have some dramatic storylines as a couple rather than ones that split them up all the time.
Tuesday, 02 April, 2013