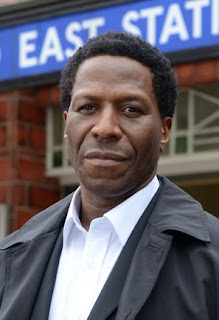 John plays the father of Dexter Hartman, who left a pregnant Ava when he went out to get milk and never returned. He has never met his son, but is determined to forge a relationship with him following the death of his own father.

"The addition of Sam gives us a solid family unit with Dexter and Ava. However, after such a long absence, sparks are sure to initially fly. Let's just hope he's got the milk!"

John added "It's a great honour and pleasure to be joining the EastEnders family. I look forward to working with the cast and to Sam's adventures on the square".
Email Post
Labels: Ava Dexter Sam James

Anonymous said…
Aww atleast we will be seeing abit more of that fittyyy dexter omds he is soo hottt!!!!!!xxx
Saturday, 20 April, 2013

Anonymous said…
If yu think dexter is a fittyy too reply 2 me and we can chat about him xx
Saturday, 20 April, 2013

Anonymous said…
please please please get this man off our screens he is more wooden than the sets
Thursday, 13 June, 2013