Best: Dexter and I make best of it 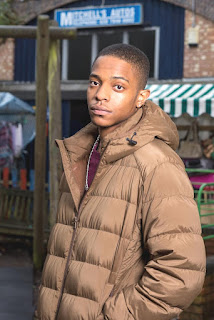 Khali, who has had a gradual introduction to the BBC soap, told Digital Spy he found it easy to understand where Dexter is coming from.

He said: "Because we're both young and we've come from a similar area, playing Dexter is not too far away from home for me.

"I think we've both made the best of our lives - both Khali and Dexter."

Khali is looking forward to seeing how the writers explore Dexter's back story and history with gangs.

He said: "As for Dexter's background being explored more, it's there for grabs for the writers. It depends what they want to explore, but it's all there for the taking.

"That's the beauty of it - there's so many different avenues that Dexter could go down."

Even though he only joined the EastEnders cast in January, Khali has already been nominated for best newcomer at the British Soap Awards.

He said: "I was really excited to hear it, especially as it's happened so soon. I haven't thought much about the night itself as I just want to keep working on and concentrating on the job. We'll see what happens."
Email Post
Labels: Dexter