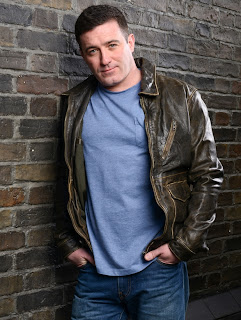 Actor Daniel Coonan has been cast as Carl White, the ex-boyfriend of Kirsty Branning, played by Kierston Wareing.

He will turn up in Albert Square next month after spending a number of years in jail, some of which was spent sharing a cell with Derek Branning.

Kirsty has only recently been accepted as Max Branning's wife, with the storyline set to spark some friction in the Square as Carl tries to win back Kirsty.

“'EastEnders' has been a part of my life since I was 12 years old,” said Coonan, who has also had roles in the likes of 'Silent Witness', 'Dancing on the Edge' and 'Law & Order'.

“I even remember talking about the storylines in school playgrounds in Tottenham and I am very happy and proud to now be a small part of its life.”

“Oozing confidence and with a dangerous edge, will Kirsty be able to resist his bad boy charms for long, or can Max save her from the lure of the dark side?” [Metro]
Email Post
Labels: Carl White Derek Branning Kirsty Max