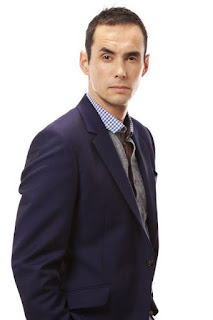 Shepherd announced his departure from the soap in March and his current storyline sees him at war with his estranged wife Janine Butcher over access to their baby daughter, Scarlett.

In an interview with Soaplife, he said: "It's leading to a gruesome and gothic finale.

"As you know, I'm leaving EastEnders later this year and I'm really pleased that things between Janine and Michael are going to be ghastly.

"I'm looking forward to it as I enjoy working with Charlie Brooks."

He added: "It's going to be a real battle of wits, and Michael doesn't contemplate the idea of losing for a minute."

However, things are looking up slightly this week when Janine employs Michael's ally Alice Branning as Scarlett's nanny.

Shepherd said: "Alice can let him know what Janine is up to. And, of course, he has more chance of getting access to Scarlett if she is in Alice's care."

Anonymous said…
Michael should have access to scarlett janine has power with money which isn't right she's a evil bitch although would like to see a nicer side of her
Monday, 20 May, 2013

Anonymous said…
Michael is a charmer with the ladies think he has a soft spot for kat
Monday, 20 May, 2013