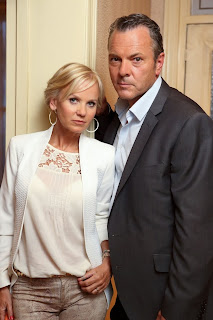 The actress, who played Detective Inspector Sam Nixon in the long-running ITV police drama, will come to Albert Square next month as Naomi when actor Michael French returns to the show as the womanising charmer.

Michael, who is making his return almost 20 years after he first arrived in Albert Square, has also appeared in hospital drama Casualty.

He was last seen in the long-running BBC soap last January when he briefly returned for the last scenes of his on-screen mother Pat Butcher and rekindled his romance with Carol Jackson, who has now paired up with Masood Ahmed.

Lisa said: "I've had a fantastic time filming at EastEnders and working with the wonderful Michael, Lindsey and Nitin has been an absolute joy.

"I can honestly say it's one of the happiest jobs I've done. Michael French is an amazing actor and to be part of such an iconic character's return to the Square felt very special.
Email Post
Labels: David Wicks Naomi