Pictures: Max to get arrested

EastEnders' Max Branning is set to face the long arm of the law when he gets arrested during his brother Jack's birthday bash.

Max  has been determined to keep up the party spirit as he celebrates brother Jack's birthday in the Queen Vic pub before the police arrive to take him in on suspicion of tampering with Carl White's car.

His arrest follows his death threat to Carl, when he realised who had helped provide the anonymous alcohol his daughter Lauren had received.

"I'll kill you," he said, raging at Carl in a preview shown on the BBC soap's website.

And when ex-wife Kirsty said: "What are you doing to do - carry this until the bitter end?", Max replied: "Bitter end? Sounds good to me."

Phil Mitchell will fight for his life after he is thrown through a car window during the crash, and Carl is injured after the car he is driving smashes into several parked vehicles.

This episode will be shown on September 5. 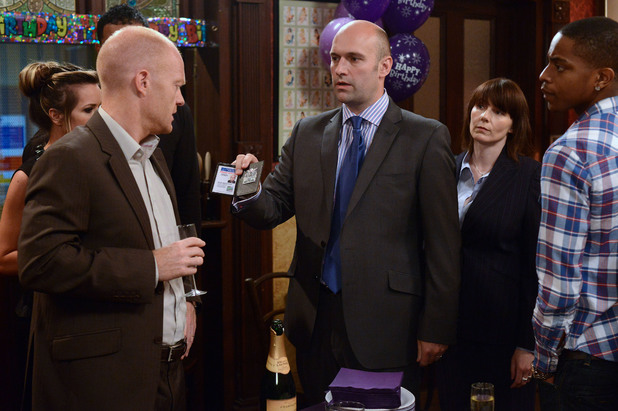 Anonymous said…
how did Phil go out the window with his seat belt still on
Tuesday, 03 September, 2013

Anonymous said…
Thats what ive been saying, it makes ppl thk its ok not to wear them
Wednesday, 04 September, 2013