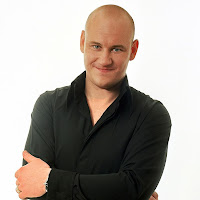 Terry Alderton is set to play the new love interest of single mum Bianca Butcher in EastEnders.
Stand-up comedian Terry is joining the BBC One soap as cab driver Terry Spraggan, fresh from his run at the Edinburgh Festival.

Terry, said: "I'm still in shock, it's all happened so fast. I can't wait to get started and I love the fact I don't have to change my name!"

Bianca has had her share of bad luck when it comes to love. She and sweetheart Ricky Butcher have been divorced twice, and her other long-term boyfriend Tony King turned out to be a paedophile.

Bianca is set to return from a visit to Manchester with new beau Terry in tow.

An EastEnders spokesman said: "Terry is your typical Cockney cabbie. Definitely a bloke's bloke, he's never short of an entertaining story to tell about who he's had in his cab the night before."

Terry Alderton is due to start filming in September and will appear on screen in the autumn.
Email Post
Labels: Bianca Terry