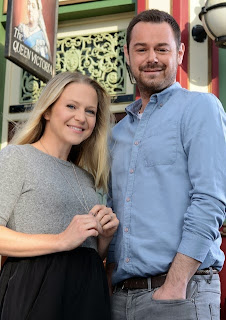 TV tough guy Danny Dyer is to become the new landlord of the Queen Vic as he joins the cast of EastEnders this Christmas.

The actor - who had previously had talks to become a Walford regular - will take over the running of the pub before the end of the year.

Dyer is known for playing a hooligan in Football Factory and a TV documentary series in which he celebrated violent characters, but he will be breaking up the fights when he takes on the role of Mick Carter.

He will be joined in the Vic by Kellie Bright who has appeared in Ali G In Da House and the Only Fools And Horses spin-off Rock And Chips who is to play his wife Linda.

Mick is the brother of Shirley Carter and Tina, who is another new recruit to the show played by Luisa Bradshaw-White.

Patriotic family man Mick is described as a "bloke's bloke" who is also a big softie and he and Linda were childhood sweethearts. "He thinks nothing of throwing on Linda's pink dressing gown and cooking breakfast for the family in the morning before getting the beer barrels ready downstairs," the BBC said.

Dyer said: "I'm so excited about starting a new chapter in my career and I cannot wait to become part of the East End family."

Bright said: "I'm very excited about joining the show. Not only am I looking forward to working with Danny but becoming landlady of the Vic is a real honour."

Executive producer of the show Dominic Treadwell-Collins has been behind an overhaul of the cast, recruiting new faces and dropping other characters.

He said: "I'm so excited to have actors of Danny and Kellie's calibre joining what is an already strong and talented company of actors.

"Having been together over 20 years, Mick and Linda have a good marriage and an easy shorthand with each other - but can also still fight like teenagers. They will laugh, cry, argue and make-up ... much to the embarrassment of their children and the delight of Albert Square's residents.

"Mick and Linda still love each other, no matter what life throws at them. And moving from Watford to Walford, life's about to throw them a few curve balls."

Mick was brought up by Shirley when their mother walked out, but they have been estranged for a number of years due to animosity between her and Linda.

Dyer said in 2009 that he had been in talks for a role in Albert Square but decided he could not handle the glare of publicity which would accompany a part in the series.

"I quite liked the idea of it. But actually, in reality, I just got cold feet. Just from having a meeting it's all over the newspapers and it gave me the horrors. Imagine if I went in it," he said at the time.
Email Post
Labels: Linda Carter Mick Carter Shirley Tina